Oregon businesses invited to take a "Safety Break' May 11

Oregon businesses invited to take a "Safety Break' May 11 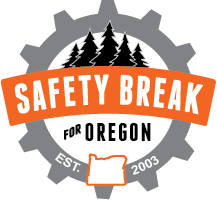 It's a day to pause and reflect on why workplace safety and health matter. It's a day to turn that reflection into sustained action to prevent on-the-job injury, illness, and death.

Employers across Oregon are invited to participate in Safety Break for Oregon, the Wednesday, May 11, event aimed at raising awareness and promoting the value of safety and health in shielding workers from harm. Now in its 13th year, Safety Break encourages employers to bolster workplace safety and health with training, award recognition gatherings, or other creative activities.

Oregon OSHA coordinates Safety Break, which is voluntary for employers. Businesses can decide what activities are most beneficial to their workforce.

"Safety Break is an opportunity for employers to remind their workers, and themselves, about the importance they attach to safety in the workplace," said Michael Wood, Oregon OSHA administrator. "A safety stand-down such as this provides an opportunity to celebrate past successes, to reflect about the remaining challenges, and to share a renewed commitment for the future."

Safety Break encourages employees and managers to work together to identify safety and health concerns. The result of this cooperation can lead to fewer injuries and reduced workers' compensation costs for employers.

Companies that participate will be entered to win one of three $100 pizza luncheons when they sign up online by Wednesday, May 4. The prizes will be given to participating companies as part of a random drawing. The Oregon SHARP Alliance is sponsoring the contest.

For more information, ideas on how to host an event, or to download graphics, visit the Safety Break for Oregon website.

On March 1, you will be able to shift your motor vehicles into hyperdrive and legally cruise at speeds of up to 70 mph on parts of Interstate 84 and U.S. 95. Thanks to House Bill 3402, which was approved by Oregon lawmakers last year, legal speeds for passenger vehicles will increase to 70 mph and commercial trucks can top out at 65 mph on Interstate 84 between The Dalles and the Idaho border, and on U.S. 95, which runs through southeast Oregon between Nevada and Idaho.

The changes, which bring Oregon up to speed with neighboring states, might make some drivers happier, but safety advocates point out that raising speed limits leads to more deaths.

Lawmakers in this country have been trying to adjust the speed-vs.-safety equation for centuries as motor vehicle speeds continued to increase – except for a 13-year period when safety was not the issue. Do you remember why?

Here is a timeline:

Aug. 1, 1757: Boston town records decreed that "no Coach Slay Chair Chaise or other Carriage shall [on Lord's days] be driven at a greater Rate than a foot Pace…"

Jan. 2, 1974: President Richard Nixon signed the Emergency Highway Energy Conservation Act, which prohibited speed limits exceeding 55 mph. The reason for the law was not safety but rising oil prices and energy conservation. However, many drivers just ignored the law and most states opposed it.

SHARP provides an incentive for Oregon employers to work with their employees to find and correct hazards, develop and implement effective safety and health programs, and continuously improve. The program aims to encourage employers to become self-sufficient in managing workplace safety and health issues. PGE employs nine people at the wind farm near Wasco in Sherman County.

Encompassing 217 turbines spread across 25,000 acres of wheat fields, the wind farm produces an average of 150 megawatts – enough to power an estimated 125,000 homes. The wind farm's peak generating capacity is 450 megawatts.

"The SHARP program is important to us because it is driven and owned by the employees," said Ken Brock, safety coordinator for PGE's generating plants in eastern Oregon and Washington. "It continues to push people to look for something better or think outside the box instead of settling for the 'we are good enough' mindset. You look around in different industries and see so man top-down driven programs, but they just aren't as effective. When a program is owned by the employees it changes the culture, and that's what drives us to a safe and healthy workplace."

"This is a compilation of a lot of hard work by our employees over several years," said Bill Messner, PGE's safety director. "There is a lot of pride among the employees and the company in knowing that they have owned this from the beginning, and together, they are now a part of an elite group of companies that have achieved this significant safety milestone. There's an added point of pride in knowing we're on the cutting edge for achieving SHARP certification at a wind farm."

Currently, about 32 employer locations in Oregon participate in SHARP. That's in addition to about 142 employers that have graduated from the program. An employer becomes a graduate when it completes five years of SHARP.

Oregon employers that have been in business for more than one year are eligible to apply for SHARP, regardless of size or type of business, although the program is primarily designed to help small and mid-size businesses.

Partnerships are key to advancing the safety and health of Oregon's workers.Oregon OSHA and the Oregon Restaurant and Lodging Association (ORLA) have forged an alliance to work together to achieve a variety of communication and outreach goals – all with the overarching objective of reducing illness and injury rates among employees in the restaurant industry.

"Employers who are committed to protecting the safety and health of workers don't achieve those goals by going it alone, regardless of the industry," said Michael Wood, administrator for Oregon OSHA, which is part of the Oregon Department of Consumer and Business Services. "Our agreement with ORLA reflects a commitment on their part to use our shared resources to protect workers in the hospitality industry."

"Safety in Oregon's hospitality industry comes first," said Jason Brandt, president and CEO of ORLA. "The term overcommunication comes to mind to make sure our restaurant and lodging partners have the resources they need to maintain safe workplaces for their employees and customers."

In seeking to reduce illness and injury rates, the agreement Wood and Brandt signed calls on both parties to increase awareness of hazard communications, electrical contacts, ergonomic issues, personal protective equipment, and slips and falls.

Additionally, Oregon OSHA and ORLA will promote a statewide dialogue about workplace safety and health, with a particular focus on the young and mobile workforce that is emblematic of the restaurant industry.

The communication and outreach goals of the alliance include developing and providing information — in English, Spanish and other languages — to employers and employees in the restaurant industry about how to recognize and prevent workplace hazards; sharing information among Oregon OSHA personnel and industry safety and health professionals about ORLA's best practices; and promoting and encouraging ORLA members to participate in Oregon OSHA's Safety and Health Achievement Recognition Program (SHARP) and Voluntary Protection Program (VPP).

Both parties will meet quarterly to share information on activities and results in pursuing their common goals.

If you want to receive the Resource Newsletter, sign up for future issues here.

Reprinting, excerpting, or plagiarizing any part of this publication is fine with us. Please send us a copy of your publication or inform the Resource editor as a courtesy. If you have questions about the information in Resource, please call 503-378-3272.